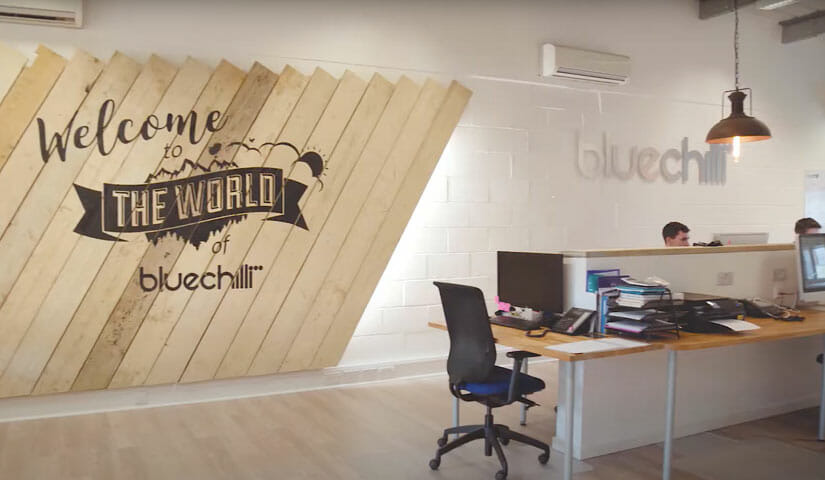 As Birmingham based design and print agency Bluechilli rapidly grew, so did its need to secure a superfast connection that would support its plans moving into the future. Here's their story.

Bluechilli Design & Print is a Birmingham-based design and print agency who specialise in delivering creative solutions across a wide variety of disciplines, including brochure, packaging and web design and development. The company is rapidly growing, and they have recently moved to a bigger head office in Aston to accommodate this.

Working with clients up and down the country, and occasionally internationally, and plans to increase their client base, a strong and reliable internet connection was a necessity for Bluechilli.

But great connectivity in the new headquarters was taken as a give, after all, they were based on a strip of business units in an industrial area close to Birmingham.

Unfortunately for the company, upon moving in they had to endure a painfully slow connection with upload speeds of less than 1 Mbit/s.

Getting to the core of their connectivity

The slow connection meant staff were having to factor in an hour for each file transfer, with only one person being able to use the internet at a time to send a file.

For a business that is constantly required to send large files and PDFs externally to printers or clients directly, the threat to the business was clear.

The significant loss of productivity was a huge source of worry for Bluechilli’s creative director, Karl Wheeler: "It was really becoming a problem… we were missing print deadlines, or otherwise coming extremely close. An hour of time is money."

Revenue was taking a further hit in that the business would incur courier charges from work overrunning, and these charges could come to as much as the amount they would make from the design job.

Bluechilli had to find a broadband solution, and fast. After finding that BT did not have a dedicated line in the area, the business started sourcing different options, and after spotting a Glide sticker on a broadband street cabinet, decided to enquire.

They found that Glide were offering the same service for half the price than BT and other providers had quoted, which, from a financial perspective "made the service feasible for the business".

BlueChilli's superfast broadband is already making a world of difference.

Perhaps the most significant benefit is that a strong connection has made for increased productivity, which the company has seen a direct growth in revenue from. Karl stressed how moving to Glide has solved a major issue for the company: "it’s been a breath of fresh air to have that connection".

As well as financial benefits, Karl explained how he has also seen wider business benefits thanks to Glide technology.

With the burden of a slow connection and the concern about missing print deadlines being removed, this has made for a better work environment for everybody. Also, when it comes to company culture, Glide superfast broadband has opened the door for flexible working, as they are safe in the knowledge staff can effectively work remotely.

Bluechilli are confident that Glide’s technology will continue to support the company’s rapid growth as the design industry rapidly moves towards digital services.

Karl summed up: "We can’t be the company we are with a slow internet connection. Without Glide, I’m not too sure what we would have done."

It was really becoming a problem… we were missing print deadlines, or otherwise coming extremely close. An hour of time is money. We can’t be the company we are with a slow internet connection. Without Glide, I’m not too sure what we would have done."